Closure of Educational Settings for Parents

How to implement Social Distancing 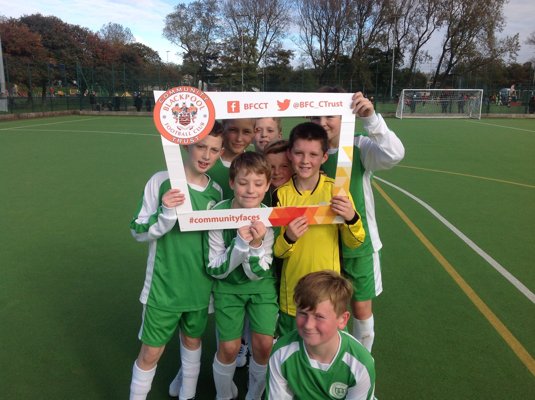 On Saturday 21st October, St. John Vianney Football team demonstrated nerve and determination to come from behind and beat a spirited Norbreck team on penalties in the EFL Kids Cup Final at Bloomfield Road.

We were amongst 22 schools to enter the tournament and on Monday 9th October, at Stanley Park, we found ourselves in a difficult group with last year’s League and Cup winners. After 4 exciting games we found ourselves needing to beat Stanley in order to progress and the narrow 1-0 win meant we topped the group undefeated with 3 wins and 2 draws!

A quarter final victory over Westcliffe set up a semi-final with Roseacre, whom we overcame in the group stages. The semi-final appeared to be heading the same way until Roseacre levelled with a minute to go! The match headed to penalties with SJV scoring all of ours and a great save from our keeper saw us through to the final!

The final itself was to take place at half time during Blackpool’s league game against Wigan. The children gathered before the game and were invited to meet the players after a prep-talk from the Blackpool manager Gary Bowyer. We then made our way to the BFC Community Trust room to complete a FIFA challenge and the first competitive meeting with Norbreck. The captains were invited to a FIFA game in order to determine who kicked off first in the match. Norbreck won this game although thankfully this pattern did not repeat itself in the main event later!

We took to the field in front of a packed Wigan end as well as the BFC support, during a torrential down pour, and soon found ourselves 0-1 down due great play by Norbreck. However, the team dug deep and soon began creating chances, leading to a fine equaliser! The game ended 1-1 and we again found ourselves having to go through the ordeal of a penalty shootout for the second time in the competition.

We held our nerve to convert all three of our penalties before Norbreck unfortunately hit the cross bar to secure our win. We will now represent Blackpool in the North EFL Competition, playing for a place at Wembley!

We would like to thank everyone at BFC Community Trust for organising the event and for all who came to support us!